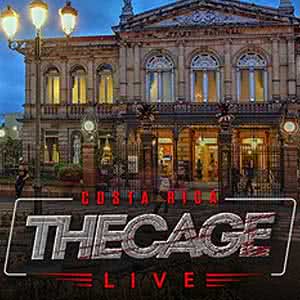 One of the most exciting events at Black Chip Poker is the “Cage” – a weekly five-hour cash game with a $1,000 buy-in. Now the site is giving players the opportunity to win a package to play in a live $5,000 buy-in Cage event over two days at the Taormina Hotel and Casino in Costa Rica.

The promotions never seem to stop coming at Black Chip Poker. Whether you are a cash game player, a fan of Sit & Go games, or a tournament grinder, there is always something for everyone at this Bitcoin-friendly poker site. Now, Black Chip Poker has launched a promotion that will appeal to all three genres of poker players – the opportunity to qualify for a $5,000 buy-in Live Cage event in Costa Rica.

Why will this promotion appeal to all three genres of poker players? Well, although being described as a cash game, the format of the Cage resembles that of a Sit & Go game or multitable tournament. It has blinds and antes that increase in value every level and, once knocked out of the event, players are unable to buy back in. The cash game element comes at the end of the event when players who have survived the five hours of action can leave the table and cash in their chips.

Black Chip Poker has announced that, from March, the site will be hosting Live Cage weekends every two months at the Taormina Hotel and Casino in Costa Rica. The events will have a $5,000 buy-in and although the exact format has not been released, each will last two days. There will also be plenty of other poker-related activities for players eliminated from the Live Cage events at an early stage. The dates announced so far are:

Packages to the Live Cage weekends can be won every Sunday at Black Chip Poker in special “Beast & SNC 3 Live Cage PKGs” satellites. Each satellite guarantees three $8,000 packages to the special events – each package consisting of the event buy-in, up to three nights´ accommodation at the Taormina Hotel, $800 towards travel costs and $1,000 spending money. Package winners can choose which Live Cage weekend they would like to play.

How to Qualify for the Live Cage Package Satellite for Free

The Satellites take place every Sunday at 6:00pm (ET) and have a direct buy-in of $55.00. However, players can qualify for the Live Cage Package Satellite for free by taking part in Black Chip Poker´s “Beast” or “Sit & Crush” promotions. These two promotions are weekly leaderboard competitions in which players are awarded points based on the contribution they make to the rake deducted from cash games (the “Beast”) or the amount paid to enter Sit & Go games (“Sit & Crush”).

Both promotions award a considerable amount in cash prizes plus hundreds of entries to the satellite tournaments. In last week´s Beast promotion, more than $45,000 was shared by the top 217 players on the leaderboard, while the top 362 player each received an entry to the Live Cage Package Satellite on Sunday 28th January. The Sit & Crush promotion did not pay out quite so much in cash prizes (around $17,500), but awarded a further 91 satellite entries.

Why this Promotion should Grab Your Attention

If you are interested in the opportunity to win a considerable amount of money by playing poker, this promotion is packed with value. Not only can you qualify for the Sunday satellites for free by finishing in a high position on one of the two leaderboard competitions, but when you are playing in the satellites, you will notice a lot of dead money on the tables due to players sitting out.

There are two reasons for so many players sitting out of Black Chip Poker´s Live Cage Package Satellites. First of all, not ever player who wins a seat in the satellite is interested in winning a package to the target event. Under the terms and conditions of the promotion, packages cannot be redeemed for cash, and the $1,000 spending money is not given to players until their arrival at the hotel.

Secondly, not everybody who qualifies for the Live Cage Package Satellites can play in them. Black Chip Poker is a popular destination for online poker players from all around the world, but as 6:00pm ET equates to 11:00pm GMT, it is a late start for players in Europe and to the East – especially as the satellite has two hours of late registration and will likely finish at around 5:00am GMT.

The Live Cage promotion is not the only opportunity players have to extract value when playing at Black Chip Poker. The site is in the middle of a series of “Million Dollar Sunday” events which have yet to meet their ambitious $1,000,001 guaranteed prize pools, and the new Streak tournaments are also overlaying by more than 50% despite their deep payout structures.