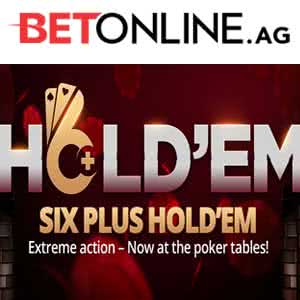 The recent roll out of Six Plus Hold’em at BetOnline Poker is now being enhanced by a special promotion that puts players into seats of freeroll tournaments.

The Six Plus Hold’em freerolls are held each evening at 8:00 p.m ET and tickets are available by completing a mission. That mission requires playing at least 100 raked hands on cash game tables of standard Texas Hold’em.

If you’re asking yourself why BetOnline doesn’t just require players to compete at Six Plus Hold’em cash games in order to earn tickets to the Six Plus Hold’em freeroll tournaments, it’s because the Bad Beat Jackpot is nearing $450,000 and many players are reluctant to leave the Texas Hold’em BBJ tables for fear of missing out on a potential huge jackpot. Six Plus Hold’em games are currently not included in BBJ action.

Win up to 5 Tickets Daily!

The missions promo is kind of cool in that you can earn from one to five tickets to the nightly freerolls – provided that you rake 100 cash game hands at a particular stake level in the 24-hour period fixed at 6:00 a.m. to 5:59 a.m. ET. Here are the stake levels and the accompanying prize pools of the five nightly Six Plus Hold’em freeroll tournaments.

There is no opting in required and freeroll tickets earned will be credited to your account. However, you have to register and play in the Six Plus Hold’em freeroll tournaments on the same day that the 24-hour period expires – or else you will lose the ticket(s).

The freerolls will not play out until a winner emerges. There is a one hour time limit on each Six Plus Hold’em freeroll tournament, with payouts distributed to players in accordance with their remaining chip stacks. This gives you a taste of Short Deck Poker action without distracting you too long from the BBJ tables.

For those players unaware, BetOnline Poker’s BBJ policy is to reward all players competing at the Bad Beat Jackpot tables whenever the jackpot hits – even if you’re not actually seated at the table where it happens. That’s a huge reason why players are so incentivized to play Texas Hold’em BBJ rather than check out the new Six Plus Hold’em game.

BetOnline launched Short Deck Poker late last month on its cash game tables. The variant has since been added to the tournament lobby at small buy-ins from $1 to $5 under a re-entry format. For a limited time, those Six Plus Hold’em tournaments on the schedule will be run rake-free, giving players an excellent opportunity to check the game out if they haven’t yet played it.

Getting back to the nightly freerolls, please be cognizant that since the events last only one hour, late registration isn’t permitted. It’s best to be logged in, registered, and ready to play once 8:00 p.m. rolls around.

As you can see, there is plenty going on at BetOnline Poker. The launch of Six Plus Hold’em, a missions promo to support the launch, and a Bad Beat Jackpot that keeps growing. Not to mention the ability to place a few sports bets as well, an activity that is gaining much more acceptance following the recent US Supreme Court decision that overturned the ban.