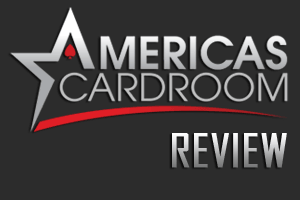 The leading skin on the Winning Poker Network – Americas Cardroom – is one of the most popular Bitcoin poker rooms that accept players from the US. Originally founded in 2001, Americas Cardroom was temporarily retired post-UIGEA in 2006, but revived in 2011 when it took over the assets and player database of Doyle´s Room. The site has continued to grow ever since.

In January 2014, Americas Cardroom first announced that it would start accepting Bitcoin as a deposit option and the site has now extended its cashier to allow Bitcoin withdrawals. Bitcoin transactions are processed much quicker than the site´s other banking options, and consequently the addition of Bitcoin has received favorably by players on the site.

The minimum and maximum limits for depositing and withdrawing Bitcoin are also more flexible than the other banking options offered by Americas Cardroom. Players can deposit the equivalent of $10.00 up to a maximum of $25,000 each day, and withdraw the equivalent of $25.00 up to $25,000 per day. There are no fees associated with either transaction other than a possible small “miner´s fee” that may be charged by a Bitcoin Wallet.

Americas Cardroom offers players a 100% match bonus on first deposits up to the equivalent of $1,000. The deposit bonus is fairly straightforward to clear by earning Award Points based on the contribution a player makes to the rake deducted from cash game pots or fees paid to enter Sit n Go and multi table tournaments.

While players are collecting Award Points to clear the Americas Cardroom bonus, they also earn “Rank Points” towards their status in the site´s “Elite Benefits” VIP program – the best rewards program of any US-facing online poker site – and “Beast Points” towards their position on the weekly rake race promotion. You can find out more about these specific bonuses and promotions on our Americas Cardroom bonus code page.

Fans of Sit n Go games will also appreciate Americas Cardroom´s “Sit n Crush” leaderboard competition, in which points are awarded on the volume of games you play rather than how you perform in them. The site often hosts high-stakes “nosebleed” cash games called “The Cage” and regularly runs the most valuable online poker tournament series for US players – the “Online Super Series” – which features a $1 million guaranteed Main Event.

Americas Cardroom offers cash games with a good stake range in No Limit, Pot Limit and Fixed Limit Texas Hold´em, along with Omaha and Omaha Hi/Lo (also available in NL, PL and FL formats). Sit n Go games are provided in Hold´em and Omaha, in a range of formats which includes Turbo, Hyper-Turbo, Heads-Up, Double or Nothing. The site also has a three-handed, hyper-turbo “Jackpot Poker” Sit n Go game.

The site also hosts “On Demand” tournaments, which are a cross between Sit n Go and MTT tournaments; where each game will start when a pre-determined number of players are seated, but late registration is usually available for up to six levels. The feature tournament at Americas Cardroom is its $150,000 guaranteed “Sunday Special” event that has a buy-in of $215.00. This is the most valuable online poker tournament available for players in the US, but don´t expect much of an overlay because this is a particularly popular event!

The level of traffic at Americas Cardroom has increased substantially over the past couple of years – aided by its reputation for fast cashouts and its innovative program of promotions. According to the online poker traffic monitoring site, PokerScout, cash game traffic now peaks at around 2,000 players, plus there are several hundred more playing in tournaments and Sit n Go games.

The quietest periods on Americas Cardroom occur between 2.00am and 8.00am EST. However, due to the growing popularity of Americas Cardroom throughout Europe and the rest of the world, you will still find in excess of 500 players at the tables. The bad news for European/RoW players who want to use Bitcoin to play poker at Americas Cardroom is that the best tournaments are scheduled to accommodate players on the Eastern Seaboard.

As the level of traffic has improved, so has the software supporting the games. Once upon a time the curse of tournament players who were running deep in valuable events, Americas Cardroom appears to have solved many of its disconnection problems and is frequently upgrading its software to higher standards. The new lobbies and player admin sections are particularly good.

Should players experience ongoing issues, Americas Cardroom has an excellent customer service center that offers live chat support in addition to email contact. The site is also active on social media platforms and poker forums – so it may be the case that a player´s question has already been answered somewhere on the Internet.

Funding an Americas Cardroom with Bitcoin is incredibly easy. Simply visit the Cashier by clicking on the big red button in the Americas Cardroom client, select “Deposit” and, when a new Window opens, click where it says “Bitcoin accepted here”. You will be asked to insert a dollar value for your transaction (a BTC conversion automatically appears on screen) and, on the next page, you are provided with the 34-digit address to send your payment to from your Bitcoin wallet. Bitcoin withdrawals from Americas Cardroom follow the same process – only in reverse.

More information about how to buy and sell Bitcoin, and use them to fund an Americas Cardroom account, can be found on the following video:

Our overall impression is that we like Americas Cardroom – to be perfectly honest, we were playing on the site (quite profitably) before the option of depositing and withdrawing by Bitcoin became available. Players can use Bitcoin for their first or any subsequent deposit to take advantage of reload bonuses frequently offered by the site and qualify for the regular $1,000 depositor’s freerolls.

Since the introduction of Bitcoin deposits at Americas Cardroom, the site has continued to grow in popularity. Consequently there is plenty of liquidity at the tables, more valuable promotions and games being played at higher stakes than you might find elsewhere – certainly among US-facing online poker sites. We would have no hesitation in recommending Americas Cardroom to a friend, and – once you have played on the site – neither will you!